Whitby has been under a 3-tier system of councils since 1974. North Yorkshire County Council (NYCC) is comprised of 7 boroughs, one of which is Scarborough Borough Council (SBC), which is responsible for an area on the east coast from Filey in the south, and beyond Whitby in the north. Whitby additionally has its own town council. Decisions have been made far from Whitby and District, affecting the lives of local people, without sufficient consideration for the needs of residents, and typically prioritising the visitor to the area. Whitby has, in addition, lost out when it comes to funding for many aspects affecting life here, a couple of examples

In April 2023, NYCC will be abolished along with the consistent borough councils, to be replaced by a unitary North Yorkshire Council (NYC).

How the new council will operate is still open to discussion, but initial suggestions from the executive of NYCC are around having Whitby in an area committee with Scarborough, and Filey being part of an area committee with Thirsk and Malton (show below). The thought process appears to be around parliamentary constituencies, but the fact is that there is no legal basis for requiring alignment with parliamentary boundaries.

There is a significant swell of opinion that Whitby has been unfairly disadvantaged over more than 40 years by being in a group with Scarborough, losing out on funding, and being subject to prioritisation coming from Scarborough, against the wishes of the Whitby residents. It will come down to how these “area committee” groups are defined in terms of their powers and what processes they operate to, as to whether Whitby councillors will be outvoted continually and the town continue to be disadvantaged. The fact is that the residents of this town have made it clear they will not tolerate it further.

The formation of NYC states “There will be new powers and money for local people across communities, market towns and parishes to drive local change, local enterprise and local solutions” and that “Local priorities will be decided by around 25 community networks, initially based around market town areas but how many and where they cover will be decided in consultation with local communities”. It is, in part, from this that Whitby Community Network started, by establishing our own community network in advance, to take advantage of this proposed greater power, though clearly NYC has not yet started and there is no definition of where these “around 25 community networks” will be located. 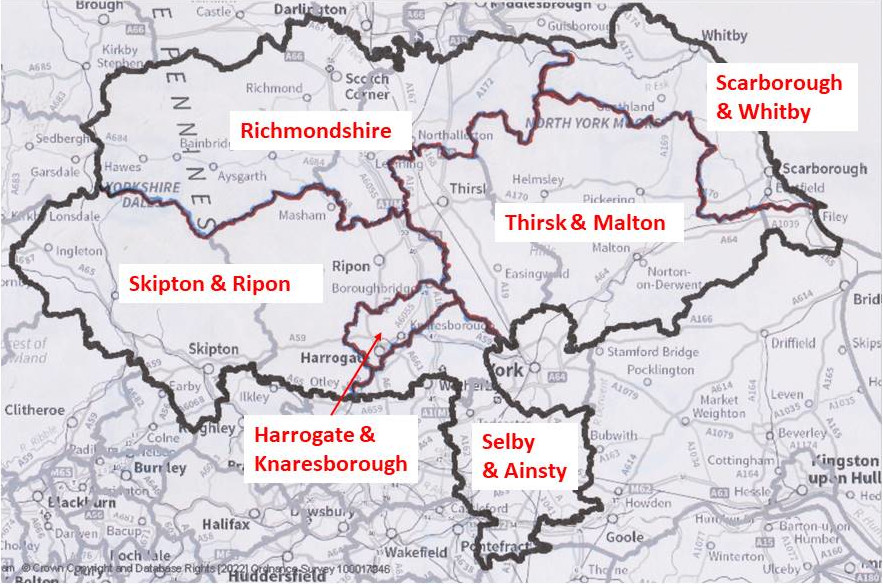 How the new council will operate is still open to discussion and we feel , as underlined in the above history, that Whitby has been unfairly disadvantaged over more than 40 years by being in a group with Scarborough and the executive of SBC, with facilities being provided to Scarborough as the normal course of action, the visitor being targeted over the resident, and Whitby subsequently missing out on funding for facilities that would benefit the local population. This cannot be allowed to continue with a unitary authority. On 13th June 2022 Whitby Parish convened a poll including the question

Note that the leadership of the North Yorkshire unitary council said previously that they will listen to what the people want to happen with this new authority.
This poll resulted in 88.7% of votes being cast against Whitby remaining in the same area committee as Scarborough. Change is needed, and we wait for the North Yorkshire unitary Council to respond to this request for action

An opinion piece by Joyce Stangoe – the views expressed are those of the author.

The biggest change to local government in North Yorkshire since 1974 is about to take place. The elections on the 5th of May 2022 has selected the councillors who will serve on the new North Yorkshire Unitary council once it comes into full effect from April 2023.

This single council will replace the present eight district, borough and county councils. The NYCC document “A Unitary Council for North Yorkshire: The case for change – Final Business Case December 2020” promised that:

We are committed to seizing the significant opportunities available to us through a single unitary authority, and we will deliver a transformative agenda for the benefit of our local people, infrastructure, and economy.

After watching the NYCC/SBC Virtual Roadshow, I have to ask if they are really seizing the opportunity, or have they simply missed the boat? The new authority intends to establish six Area Committees based on parliamentary constituencies. This means that Whitby will stay in the same Area Committee as Scarborough, whilst Filey and Hunmanby will come under the Thirsk & Ryedale Area Committee. The Whitby area will have 4 councillors and Scarborough will have 11 councillors.

These Area Committees will have devolved responsibility from the Unitary council for the discharge of statutory functions and services at the local level, including planning, licensing, public rights of way, highways, and potentially other areas.

Will this really “deliver a transformative agenda for the benefit of our local people, infrastructure and economy”?

As their submission to the government claimed so proudly, North Yorkshire is unique in having two National Parks and three Areas of Outstanding Natural Beauty. Ninety eight percent of the county is either sparsely (13%) or super-sparsely (85%) populated with just over a third of the population living in these areas.

It is generally more expensive to deliver services to sparsely and super-sparsely populated rural communities. Their residents often experience physical and digital isolation, with difficulty in accessing services, jobs, transport links and education. Whitby is one of only 6 towns in England classed as an urban settlement set in a sparsely-populated rural area.

The NYCC Locality Profiles 2015-16 identified that those communities living within or on the fringes of the National Parks, such as Whitby, share a distinctive demographic profile plus significant geographic and environmental constraints. The needs of such communities differ substantially from those living in less isolated towns and villages with much easier access to the A1, A19, A64 corridors / main rail routes – or from the Selby area with its good transport links and proximity to the City of York.

Do the proposed Area Constituency Committees really offer the best option? Has the new Unitary considered creating Area Committees that focus on the National Parks and Areas of Outstanding Natural Beauty, together with their service towns? Such a structure would highlight and support the new Authority’s environmental credentials and their ambition to become the first carbon-negative region.

The existing National Park Authorities have well-established environmental protection and improvement programmes; significant planning expertise; and a good network of parish forums and local contacts. Whitby is one of the service towns serving the North York Moors National Park and it is surrounded by the National Park.

Would it not make more sense for Whitby to be included in a more rural Area Committee, rather than one serving a much larger town like Scarborough, simply because it has shared the same MP for the last 30 years? Parliamentary boundaries can and do change. They are reviewed every five years.

Surely the new Area Committees should group together those communities with common geographic and demographic characteristics, which have a major effect on the local community’s access to the services provided by the Unitary Authority such as education, transport, health, and social care, etc. These services are far more relevant to residents’ daily lives than whether or not they happen to share the same MP.

This local government re-organisation could offer significant opportunities. But the hoped-for transformation will not happen if Whitby & District is still subordinate to Scarborough, as before!

Whitby has Whitby Town Council (WTC) to provide “ultra local council services”, managing local assets and services. Its councillors are not generally paid. It has full council meetings (every 2 months), as well as individual committees for specific areas. A similar situation applies to Parish Councils around the District, though they do not have individual committees, and their meeting tends to be once per month.

Specific to WTC, agendas for meetings are put here, typically 3-5 days before the meeting. Whilst members of the public can attend these meetings, they have a limited role to play; much more limited than in Whitby Community Network where a resident can determine their own level of involvement. Amongst the problems that have been raised about the way WTC is currently run

Some of these criticisms likely do not apply to all Parish councils in the District (where they have a website) as Parishes are able to set their own rules.